Raising kids and having my husband travel comes with its challenges. There have been times that I’ve questioned my mothering skills and have become so frustrated that I would cry if his trips were one day too many.

A couple of weeks ago I asked my adult daughters how they felt about their dad traveling. More importantly, I was curious how they saw me as I was carrying that extra parenting bag on my own.

Paige, my oldest daughter, was little more descriptive in her answers. I guess you could say the firstborn view came out in her. Paige was born into the military life with Jeff who was gone for 6 months at a time and was surrounded by other kids who had their dad gone for long periods as well. Paige was a strong-willed child and still is. She would let you know if she was unhappy and she was definitely not afraid to speak her mind.  Now that she in her early twenties she has become an amazing young woman. She is independent and strong, like her mother. She works full-time for a start-up company in Austin.  Surprisingly, she and her sister, Jillian, live together!

My youngest daughter, Jillian, has always been the wise, old soul kind of girl. She often tells me to settle down, or says, “Mom, you gotta pick your battles with Tobin or Adin.”  Jillian helped me a great deal when I was dealing with health issues, and she immediately stepped up and helped out with family responsibilities that I couldn’t handle at that time. I will always be grateful and blessed for her help and attitude. She is in her early twenties now and works at a Flour Mill. In addition to her job, she is a part-time student at a Junior College in Austin studying  Organic Farming.

Here are the five thought-provoking questions I had asked my girls….

Jillian: I’ve never thought it was that weird because that’s how it’s always been! It’s cool that any city I go to he has recommendations. The opportunities to travel both as a kid with the family and now as an adult is amazing and all the trips we’ve been able to take because of his job is incredible… not something to take for granted!

Paige: Kind of annoying. But it just becomes life. At some point, I realized how weird it would be if dad was home all the time and how annoying that would be.

As a little girl, teenager and now in my early twenties?

2. Did you learn to play-off on Dad and I when he was on a trip? How was I when dad was gone?

Jillian: Mom is the person to ask about most things but for the “big” decisions you talk it through with mom and get the final vote of approval from dad. Dad’s harder to talk to sometimes and sometimes more strict… but I think that’s based off military experience, not pilot life. Mom was always firm on “I’m the same person no matter if dads here or not” so not much of difference.

Paige: Not consciously? Mom, obviously, took the brunt of the parenting just because of proximity. 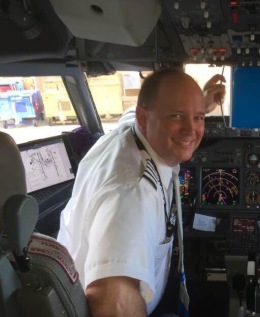 3. Did you enjoy your dad being gone? Cause I recall a few times you girls asked when he was leaving.

Jillian: Sometimes! Because he gets antsy when he’s home too long! But also sometimes I’d think “hmm when is dad gonna be home for longer than a day or two?” when we were working on a project or he got called in semi-unexpectedly.

Paige: Yes, sometimes. We were a house full of girls. He was (and is) this giant man who booms around the house. I’m making him sound like a giant, but he’s not. He just takes up space. Like any human does.

4. Were you ever worried about Dad flying? If so, Why?

Jillian: No. I think flying with him in smaller planes 1-on-1 and seeing his knowledge really solidified how much knowledge he has about flying/air safety that I can’t even grasp.  He’s also an observant guy who always talks about issues in the news/scary stories openly and I’ve never doubted he can think smart and quick to manage any situation.

5. What have you learned by having a dad who’s a pilot?

Jillian:  Airports aren’t scary or stressful unless you make them that way. Time management is the key to life.

Just for fun, I asked the girls what they told friends if they asked what their dad’s job was…

Jillian: My dad flies airplanes and its cool. My friends thought the same thing. Plain and simple.

Paige: What he did for work and what he did in child rearing are 2 different things, but related.

WOW! After reading their honest answers, I cried. But a proud cry.  As a mom, I felt like I wasn’t there for them as I wanted to be. I was surviving from sun-up to sundown. I yelled, slammed doors from time to time, and I’d cry in my closet or behind a locked door.locked.  I tried hard not to reveal the ugly side of me, but more often than not, I did just that.

Lest you think I forgot about my son for this interview, I promise I didn’t! I was going to ask Tobin these questions as well, being a teenager I knew his answers would only be one-word sentences. So I’ll wait a few more years to ask.

If you’re a young mom, a mom in the teenage season or have adult children just remember that you’re doing a great job. Your kids see that.  I had a friend tell me, “The seasons you are in with motherhood become different only cause you get different.”

1 thought on “Daughters of a Pilot…”